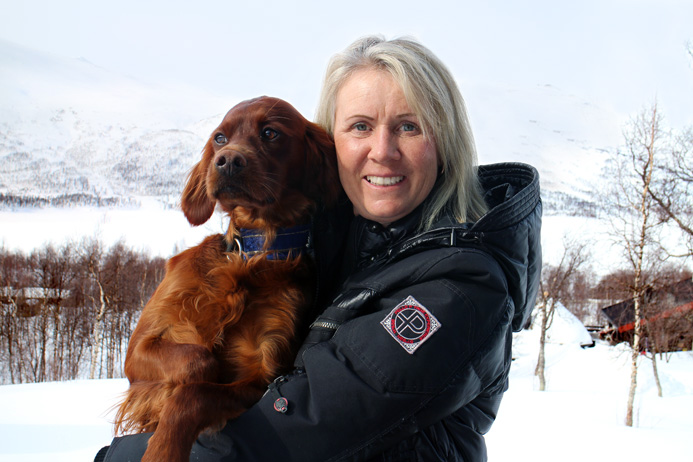 It’s easy to get fooled into thinking Ulla Mikkola’s workplace is the lovely mountain cottage in Umfors. In reality, it’s in Falun, 84 Swedish miles away, at a server where she cooperates with multiple colleagues. She only has to start her computer, get her software running, do a security backup, recieve any new uppdates, and she’s ready to meet her colleagues a mere click away.

Ulla works as a private company runner with VVS-projection. One of her main employers is the engineer group Ståhkloo in Falun. The company has about 20 consultants in their organization, where the base of their operations revolve around heating, ventilation and sanitation installations. Ulla’s specialty is ventilation, and she currently works with a school in Märsta. Another big project of hers just concluded in Sundbyberg, with restaurants and appartments in the same building.

“Within a consultation group with architects and engineers, I make drawings that first become a draft for further development, which an installator can give a price estimate for. It’s important to visit the area you work with to see how the whole project will work.” Ulla tells us.

“We still have a beautiful house left, with a lakehouse outside Falun. Once a month I go down to work there, and to visit my customers. We then start up new projects, ushering in even more meetings. It takes about as long to fly from here to Arlanda, as it does to drive between Stockholm and Falun. The best alternative would of course have been if I had worked directly near Stockholm because commuting by plane works so well.

How did You Wind up in Hemavan?

“Our hugest interest and hobby is our dogs.” Ulla says. “We also have a little litter of Irish Setters, so the best thing for us is to be out in nature and go hunting with our four-legged family members. The way carnivore politics are running concentrates wolf populations in Dalarna and Värmland, which makes the use of hunting dogs unsafe each time you go out with them.”

“Hemavan has great commuting systems, with daily flights to stockholm and possibility for data communication by string. These were an important basis for our decision to move to the mountains. Hemavan felt very attractive because of it, so we began searching for a place to live. We had to look for a rather long time, unfortunately. However when we visited our new house it felt perfect. All we had to do before moving here was work out access to broadband by doing some infrastructure work.

What is the best thing about Hemavan and Umfors?

“We have everything here. I do not want for anything, natural experiences all around.” Ulla points her hand out across the beautiful apline setting before us, separated only by a window.”You get to choose from fishing, hunting, skiing. There’s an indoor swimming pool, workout classes, yoga, you name it. We’re close to Noway, Mo i Rana especially. Which lets us do whatever shopping we need. There’s also a nice range of enjoyments in the form of restaurants, pubs, and live bands. If anything could use improvement it’d be the phone network. Could be more stable, but apart from that I’m far closer to the store than I ever am in Falun. Closer to the tennis court, too.” Ulla laughs

“Turns out, our next door neighbours have installed their own tennis court that they can use, and the store “Gränslöst Köpcenter” (Boundless Shopping Center) is a store she makes use of only a few kilometers away. In Hemavan lies the new mall Bayhill Center with multiple boutiques, as well as a “Systembolag” (Alcohol Shop). Many Norwegian visitors can be found at the mall.”

“The proximity to Norway is something that has also benefitted me, even if the rules for VVS look a bit diferent there, it’s something I’ll have to get around to learning more about. There are numerous jobs within the industry and many competent employees are retiring. The future looks bright for those within this line of work, so you can live where you want. You can practice your hobby in peace and quiet, right on the corner.” Ulla says

Ulla’s husband Markku is a fotographer, and sent in a picture taken from Sytertoppen to BBC Travel, to their piece entitled “Show us your hideaways and getaways”. The photo (Found second in the second row) was chosen by a jury where Sytertoppen was recognized as an oasis of the world. The picture of the couple and their dogs was taken by an automated program on the camera.